Yes, there are two words for the past tense of 'hang'. Sorry about that.

The past tense of hang in almost all situations is hung. You hung a picture on the wall, or you hung out at the mall. Only use hanged when referring to someone being sentenced to death via hanging.

Some people bristle when they hear hanged or hung used incorrectly. Their blood boils. Their vision blacks out. Mixing up hung and hanged will make these people thoroughly cheesed off and mad as heck. Irate copy editors are no fun, but you can escape their ire. Read on. 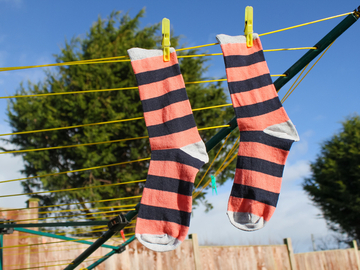 Observing the popular distinction between 'hanged' and 'hung' will not make you a better writer, but it will spare you the annoyance of being corrected for having done something that is not wrong.

The standard rule for the past tense of hang is this: in almost all situations, you should use the word hung.

I hung a picture of Noah Webster on the wall.
After school, she hung out in the library.

Use hanged when referring to a person being suspended by a rope around the neck until dead.

The Salem "witches" were not burned; they were hanged.
Justice Wargrave ordered Edward Seton to be hanged by the neck until dead.

It's not that simple, however: most usage guides reserve hanged for people subjected to death, which means if an inanimate object is suspended from a gallows, the correct term is hung.

Despised by the voters, he was hung in effigy.

A stripped-down version of why we have these two different words is that the word hang came from two different verbs in Old English (and possibly also one from Old Norse). One of these Old English verbs was what we might think of as a regular verb, and this gave rise to hanged; the other was irregular, and ended up becoming hung.

Hanged and hung were used interchangeably for hundreds of years, although over time the one from the irregular verb (hung) eventually became the more common one. Hanged retained its position when used to refer to death by hanging, possibly due to being favored by judges who were passing a sentence. However, both forms are commonly found, and both are commonly found used in either sense.

The Hanged vs. Hung Debate

Is the distinction important? It's still commonly found in usage guides, which typically say that the past and the past participle of hang should be hanged only when referring to a person being subjected to death. Hung is preferred, at least by people who make a distinction, in almost every circumstance. However, not everyone makes this distinction. The Merriam-Webster Dictionary of English Usage has a take on this that differs slightly from the one commonly found in usage guides:

The distinction between hanged and hung is not an especially useful one (although a few commentators claim otherwise). It is, however, a simple one and certainly easy to remember. Therein lies its popularity. If you make a point of observing the distinction in your writing, you will not thereby become a better writer, but you will spare yourself the annoyance of being corrected for having done something that is not wrong.

In other words, observing this distinction will help you to avoid criticism from people with strong feelings on the subject. But don't get too hung up about it.